An extraordinary global public servant and friend is mourned

The Institute of Human Virology (IHV) at the University of Maryland School of Medicine, deeply mourns the passing of Board of Advisors member, Harry Huge.  Mr. Huge was a founding Board member who was generous in his support of the IHV and the Global Virus Network (GVN), both co-founded by Dr. Robert Gallo.

“The Institute was pleased to honor Harry with the 2010 IHV Lifetime Achievement Award for Public Service held uniquely that year in the ancient region of Calabria, Italy,” said Robert C. Gallo, MD, The Homer & Martha Gudelsky Distinguished Professor, Co-founder & Director at the Institute of Human Virology, University of Maryland School of Medicine and Co-Founder and Chairman of the International Scientific Leadership Board of the Global Virus Network (GVN). “Harry had a distinguished law career with, among others, American labor unions and the country of Estonia, and he was generous in his philanthropic work providing American students continued education scholarships, particularly in the area of science, through the Huge Foundation.  We are most grateful for his profound support of advancing biomedical science, particularly for the IHV and the GVN, and we extend our deepest sympathies to his loving family, especially his devoted wife, Reba, and son, Theodore.”

“Harry was one of those individuals who had the humility of listening and when he spoke you best listen,” said John D. Evans, Co-Chair of IHV’s Board of Advisors and Chairman and CEO of the Evans Telecommunications.  “His contributions to not just IHV but to contemporary society are legion. His passion, insight, vision, leadership and humanity serve as a beacon for generations to follow. A great friend to so many, he will be missed.”

“Harry was a very special friend - one to be trusted, one to be counted on and was there when a back needed covering,” said Terry Lierman, Co-Chair of IHV’s Board of Advisors.  “He was thoughtful and inspiring through his good deeds and special priorities.  Harry earned many feathers for his wings.” 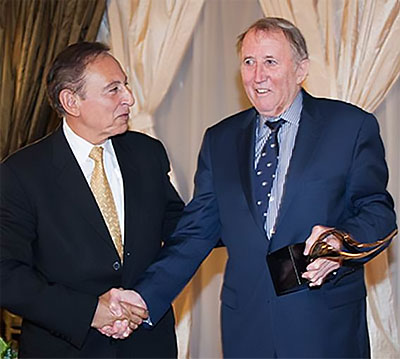 Mr. Huge passed away on April 27, 2020 and was co-founder and chairman of the Harry and Reba Huge Foundation. He practiced law nationally and internationally in the areas of commercial litigation in federal and state courts, international business and transaction law, corporate matters, including securities, venture capital, biotechnology, communication, and investment transactions. Mr. Huge received his B.A. from Nebraska Wesleyan University and his J.D. from Georgetown University.

Mr. Huge also served from 1977 to 1981 as a member of the President’s General Advisory Committee on Arms Control and Strategic Weapons. In June of 2006, Mr. Huge was awarded the Medal of the Order of the Cross Terra Mariana for his efforts in Washington, assisting in the restoration of Estonian independence. In November of 2010, Mr. Huge was named an Honorary Consul of the Republic of Estonia, for the state of South Carolina. In the late 1960s and early 1970s, Mr. Huge was actively involved in the civil rights movement, serving as President of the Voter Education Project in Atlanta, which registered black voters throughout the south.

Mr. Huge has served on many boards, including Nebraska Wesleyan University’s Board of Governors, the Hollings Cancer Center at the Medical University of South Carolina, and the Board of Advisors of the Institute of Human Virology at the University of Maryland Medical School. In October 2010, Mr. Huge was awarded the IHV Lifetime Achievement Award.  His obituary can be found here.

Formed in 1996 as a partnership between the State of Maryland, the City of Baltimore, the University System of Maryland, and the University of Maryland Medical System, the IHV is an institute of the University of Maryland School of Medicine and is home to some of the most globally-recognized and world-renowned experts in all of virology. The IHV combines the disciplines of basic research, epidemiology, and clinical research in a concerted effort to speed the discovery of diagnostics and therapeutics for a wide variety of chronic and deadly viral and immune disorders - most notably, HIV the virus that causes AIDS. For more information, visit www.ihv.org and follow us on Twitter @IHVmaryland.