The Institute of Human Virology (IHV) was co-founded and is directed by Robert C. Gallo, MD, the eminent scientist who became world famous in 1984 when he co-discovered HIV as the cause of AIDS. Little was known then of the mysterious disease that was fast becoming the deadliest in medical history. Since, Dr. Gallo has spent much of his career trying to put an end to this raging epidemic and other viral, chronic illnesses.

Though best known for his co-discovery of HIV, Dr. Gallo and his team pioneered the development of the HIV blood test, which enabled health care workers for the first time to screen for the AIDS virus - leading to a more rapid diagnosis while simultaneously protecting patients receiving blood transfusions. His research also helped physicians develop HIV therapies to prolong the lives of those infected with the virus. In 1996, his discovery that a natural compound known as chemokines can block HIV and halt the progression of AIDS was hailed by Science magazine as one of that year's most important scientific breakthroughs. This also helped others identify CCR5 as the HIV co-receptor since these chemokines were known to bind to CCR5.

Prior to the AIDS epidemic, Dr. Gallo was the first to identify a human retrovirus and the only known human leukemia virus - HTLV - one of few known viruses shown to cause a human cancer. In 1976, he and his colleagues discovered Interleukin-2, a growth regulating substance now used as therapy in some cancers and sometimes AIDS. And in 1986, he and his group discovered the first new human herpes virus in more than 25 years (HHV-6), which was later shown to cause an infantile disease known as Roseola and currently is hypothesized as a strong suspect in the origin of Alzheimer's disease.

Today, Dr. Gallo's work continues at the IHV, a first-of-its-kind virology center that combines the disciplines of research, patient care and prevention programs in a concerted effort to speed the pace of medical breakthroughs. IHV was co-founded in 1996 by Dr. Gallo alongside his now longtime colleagues, William Blattner, MD, who is now retired, and Robert Redfield, MD, associate director of the IHV and director of IHV’s Division of Clinical Care and Research. The Institute is a part of the University of Maryland School of Medicine and affiliated with the University of Maryland Medical Center. IHV's patient base includes approximately 6,000 in Baltimore and Washington, D.C., and more than 1.3 million in African and Caribbean nations. In particular, IHV is internationally renowned for its basic science and vaccine research, which includes a preventive HIV vaccine candidate in human clinical trials and funded largely by the Bill & Melinda Gates Foundation. The Institute has five Divisions comprising Basic Science, Vaccine Research, Immunotherapy, Clinical Care and Research, and Epidemiology and Prevention, and four Scientific Core Facilities.

In 2011, Dr. Gallo co-founded the Global Virus Network (GVN) to position the world to rapidly respond to new or re-emerging viruses that threaten mankind, to bring together and achieve collaboration amongst the world’s leading virologists, and to support training of the next generation of medical virologists.

Prior to becoming director of the Institute in 1996, Dr. Gallo spent 30 years at the National Institutes of Health's National Cancer Institute, where he was head of its Laboratory of Tumor Cell Biology. A Connecticut native, his interest in science and medicine was first stirred by the loss of his 6-year-old sister to leukemia when he was just 12 years old. The physicians who cared for her made a lasting impression and Dr. Gallo would later make scientific research - and the opportunity to help put an end to deadly diseases - his life's work.

Lifetime achievements in Dr. Gallo's legendary career include discoveries that have led to both diagnostic and therapeutic advances in cancer, AIDS and other viral disorders while his vision remains unprecedented in the field of virology.

Dr. Gallo's research has brought him international recognition as well as election into the National Academy of Sciences and the Institute of Medicine. He has been awarded honors for his contribution to science from countries around the world and holds 35 honorary doctorates. Dr. Gallo was the most referenced scientist in the world in the 1980s and 1990s, during which he had the unique distinction of twice winning America's most prestigious scientific award - the Albert Lasker Award in Medicine - in 1982 and again in 1986. Dr. Gallo is the author of more than 1,200 scientific publications and the book "Virus Hunting - AIDS, Cancer & the Human Retrovirus: A Story of Scientific Discovery." 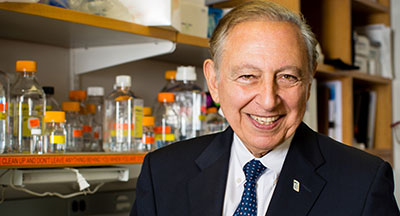 The Institute of Human Virology (IHV) was co-founded and is directed by Robert C. Gallo, M.D., the eminent scientist who became world famous in 1984 when he co-discovered that HIV was the cause of AIDS and developed the HIV blood test.